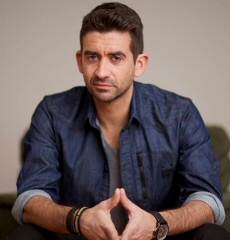 One short year ago, Aaron Shust sat excitedly in the crowd at his first Dove Awards to enjoy performances by many of the artists he had long admired. Today, just twelve months later, he’s returning to take the stage himself at his second Dove Awards show, carrying an armload of nominations that have followed his own smash hit single, “My Savior, My God.”